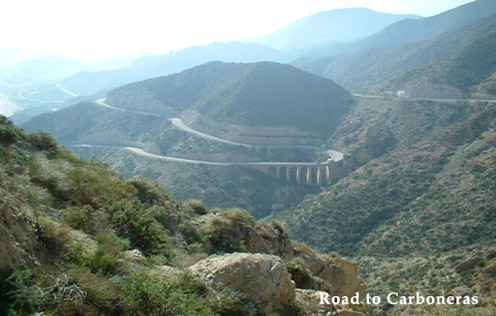 Carboneras is located from entrance to Cabo de Gata’s National park, majority of the town has been secured as the nature reserve land particularly the National park. The green mountains that once surrounded the town have been stripped of their coal and the trees cut down to fuel the furnaces. This now arid landscape contrasts with the deep blue of the Mediterranean Sea . When the coal ran out, Carboneras turned firstly to fishing and then, more recently, has become an industrial centre producing energy and a busy tourist resort Virgin coastline as well as the crystalline waters which can be found in Ancon beach, Los Barquicos, Los Cocones, La Puntica, La Marinica, Los Muertos, El Algarrobico (with the controversial Hotel), and San Andrés island are perfect for a wonderful experience of fishing. The heart of the town is Plaza del Castillo or castle square. The San Andres Castle was built in 16th century and is currently being restored. Carboneras has almost 17km of sandy beaches, many have th Blue Flag award and some are secluded and only accessible by boat.

Sailing and scuba diving are some of other activities of entertainment in Carboneras. Sponsored by Nautical club, Isla de San Andres, a port that is going to be specifically dedicated to the nautical sports is to be built in the near future. According to the plan, 650 moorings for boats will be present in the port which may range from 6-20 meters long. Other places of interest is Agua Amarga, Las Negras and the beautiful coastline all the way to San José. Places of interest: Two other notable fortifications are the Torre del Rayo in the north, built in 1584 and Torre de Mesa Roldan ib the south built around 1776. Take a stroll to the lighthouse here and you will be rewarded by breathtaking views of the cliffs and beaches along the coast.  Parish Church of San Antonio de Padua: The church of the patron saint of Carboneras Casa del Laberinto: Designed by Andre Bloc in 1964.  Property for sale Carboneras, to search for homes in Carboneras or in nearby towns contact RMB Spain.